When Jamie arrived first into this world, I enthusiastically introduced him to the wealth of toys I had acquired on various late-pregnancy shopping trips, internet shopping frenzies and as presents.

To my dismay Jamie was not very receptive.  He was entirely oblivious to my attempts of stimulating him and playing with him, such as falling asleep in the activity gym.  My little coward was scared of all the cute furry animals I surrounded him with (it probably didn’t help that they were larger than him).  He seldom cried but the annoying music played by his mobile and the bouncing chair totally set him off.

It was only then that I realised that newborns don’t care much about the outside world and my brightly coloured toys are total waste as babies initially can only see black and white and can’t focus no further than 25 cm.  Even when their colour vision develops after a couple of weeks, babies still prefer to look clear contrasts in bold colours.

The only things that raised some kind of interest in Jamie was this Manhattan Toys Wimmer Ferguson Nursery Novel (about £10) which I got as a new baby present from our interior architect, a new mum herself.

Jamie’s absolute favourite however was not ment to be a toy or baby stimulator.  This lovely Ferm Birdcage Pillow (about £60) was super successful with my offspring and he spent most of his waking hours lying there with his eyes focused on the black and white stripes.  He was even happier when I combined the pillow with my black and white striped coffee mug.  No one told me it was so easy to entertain a newborn!

When I understood my son’s obsession with black and white, I finally found a solution to focus his attention on me.  All the cooing, singing (badly), making faces, kissing and hugging did not show much reaction, but wearing black and white stripes did! 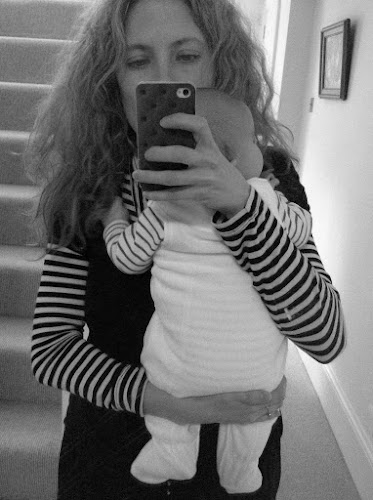 It was only around week 6 or 7, when Jamie started being impressed by my carefully chosen mobile and didn’t scream the house down when I approached him with Sophie the Giraffe.  It was also then that he started focusing on my face which was indicated by his sudden heartbreakingly cute cross-eyed look.  I hope that’s normal for this age, otherwise I see a hefty ophthalmologist bill coming our way!

This entry was posted in New Baby and tagged 6 weeks, black and white, newborn, toys. Bookmark the permalink.

One Response to Boys Toys – The first 6 weeks

Leave a comment and make my day! Cancel reply

With Google+ plugin by Geoff Janes and Thorsten Hake